“We’ve been compared to a Norman Rockwell painting…”

Old ammunition posters top the 11 foot walls, just under the metal ceiling and just over the products that pack every available space in the store (28′ x100′ plus basement and warehouse) 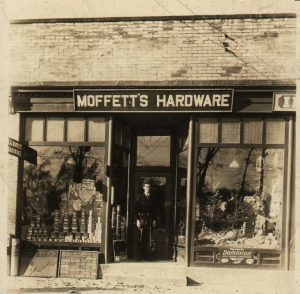 Having been fired and re-hired 2-3 times by a temperamental boss, in 1922, Sterling Moffett decided he could do better on his own. (He was right!)

It took 3 days for a horse-drawn scoop to dig the basement. The original dirt floor and cement posts are still serviceable.

Sterling saw a lot of changes; cars become common, electrical power, indoor plumbing…and his products and services kept up. He sold TV’s in the 1950’s and wood stoves in the 80’s.

He had a total staff of 2 for many years. His son Dave came to work after serving in WWII and Dave’s son Don started full-time in 1973. Dave’s wife Anne did the bookkeeping – a true family business. Sterling was active in the business until the mid 80’s. He died in 1993 at the age of 101. Dave retired in 1990.

In 1975, the store doubled in size extending back and the warehouse making an L shape.

The old store had been so crowded that the existing stock took up 3/4 of the new space. New products are carried as long as they are available – oil lamps to washboards to cast iron griddles. 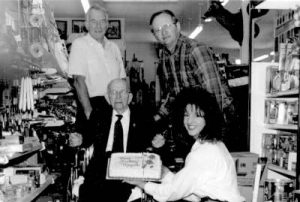 Sterling, Dave, and Don have each been honored by the hardware industry for over 50 years of service. Possibly the only 3 generation set of Gold Hammers in Canada. The awards can be seen on display in the store near the office. The Store and family (Don and wife Brenda) were prominent in Canadian Living’s article in 1994 – 10 Best Places to Live in Canada, and recently in Saltscapes magazine. 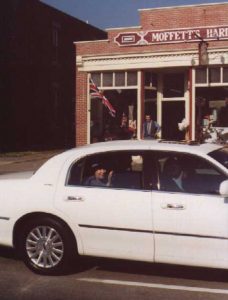 “The Day The Queen Was By”
Picture by Don Moffett 2002

“We’re an old-fashioned hardware store, where customer service is number one!”